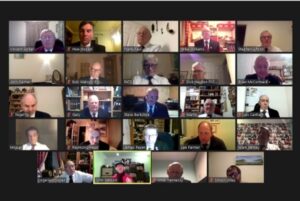 It really does seem quite remarkable that on the 10th February Porchester Mark held its third Virtual Business Meeting and even more remarkable, had 25 in ‘attendance’. It really is worthwhile having these meetings and encouraging that so many make the effort to attend even if business is minimal.
Looking back for a moment, little did we know that the February meeting of 2020 was to be our penultimate meeting for the year, when we were delighted to receive a good number of visitors from Wantage Lodge who passed to us the Travelling Keystone. The intention being that Porchester would visit Leopold Lodge No. 235 in March and the Keystone would continue its journey. Sadly, we are approaching a year later and still unable to achieve this, but on a bright note Leopold Lodge will be pleased to know that we are dusting the Keystone occasionally!
Our next meeting in March would normally be Installation so our main point of business was to to confirm that our Master and Treasurer would be continuing in their respective offices. Needless to say, they most certainly are and W.Bro. Mark Henley (Master) and Bro. John Watson (Treasurer) were of course delighted to continue! And don’t we all massively look forward to the day when a proper Installation will occur, but it won’t be next month for sure although we can look forward to the appointment of several new officers following a reshuffle necessitated by the sad loss of our Secretary W. Bro. Roger McGuire last year.
It was pleasing to hear from the Treasurer that despite not having collected any Charity money during the year, funds were such that donations could be made at our March meeting and details of the proposals will be agreed at that VBM.
There were then discussions on several in house matters and before the meeting was closed W.Bro. Huw Hopkin, Prov Grand Sec, on behalf on the RW Prov Grand Master, congratulated the Master and Treasurer on their continued appointments and then thanked the acting Provincial Officers and all of the Brethren for their attendance.