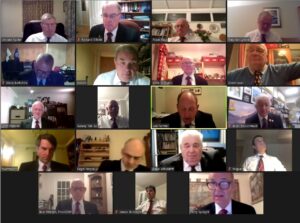 Back in the days of normality, the November meeting for Porchester Mark would have been held in Newbury and this year fell on the 11th of the month. But of course, we are not in ‘Normal’ anything presently and so we ventured into our second virtual meeting.
Our first virtual meeting was a success, and we are pleased to say that this one was equally well received and went well. An increase of one in overall numbers to twenty, and once again our thanks to the P.G.M. for joining us along with a total of seven other Provincial Officers and members of other Lodges.
It was a sad fact that one of the principle reasons for having this meeting was so that the Lodge was able to have the Eulogy and pay respects to our sadly departed Brother, and long-time Secretary, W. Bro. Roger McGuire. Roger died suddenly not long after our last actual meeting, which was our Installation, and his funeral was during the first lockdown period which meant that we could not attend to give the send off this very devoted Mason deserved. It would be nice to think that sometime not too far away in the future our Lodge will meet in person to remember him.
As the meeting was being held on the 11th, our Brother Chaplain gave a short presentation on some of the relevance’s of this day which was appreciated by the Lodge.
There was little other business conducted but a short period of general discussion led quite nicely into some friendly banter, which was usual Porchester manner, and good to see as it meant people are becoming more relaxed with, and accustomed to, the Zoom experience. We want to get more members joining in and, subject to any restrictions in place at the time, we are going to get some of our more experienced Zoom users to visit the inexperienced and IT nervous members, and hopefully get them ‘plugged in’ !!
Although our official next meeting is not until February 2021, and who knows if that will be Actual or Virtual, we are proposing to have another, probably non-formal, Zoom somewhen near Christmas.
As this report is of our last formal business meeting of the year, all the members of Porchester No. 27 take this opportunity to send sincere best wishes to Mark Masons throughout the Province, and hope and pray that we all have an enjoyable Christmas and stay well during the Festive season and throughout the New Year.