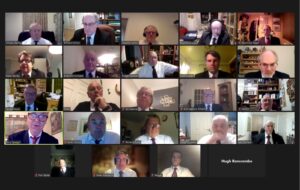 March 10th was our fourth Virtual Business Meeting and replaced our unfortunately abandoned Installation Meeting. It was a pleasure to see so many in attendance and our continuing Worshipful Master, W.Bro. Mark Henley and the officers of the Lodge were very appreciative of the 24 who joined the Zoom meeting and extended a particular welcome to the R.W. Prov Grand Master and the Provincial Grand Officers present.
The Installation meeting a year ago was the last meeting that Porchester Mark met for and at that time nobody knew that it would be the last time for probably 18 months, but even sadder, nobody knew that it would be the last meeting that our much-missed Secretary W. Bro. Roger McGuire would be arranging. There was some reflection on both of these points and a resolve that our next meeting in October would surely see Porchester up and running with lodge work and a festive board at which we can not only be pleased to ‘meet again’ but pay tribute to Roger in the way we want too.
It was with considerable pleasure that we agreed to donate £500 each to our Worshipful Master’s chosen charity, Young People and Children First, and also to BeMBA to support the Air Ambulance donation. This was obviously not from money raised this year but money that we had in our benevolent account, and as an appeal to every Lodge we say, charities are all so short of donations that money sat in a bank account benefits no one. If you have money you can spare, donate it. There has never been a more needy time.
There were various business matters that were attended to but one of these was the very positive intention to resume the social occasion that we have held for several years and this year to include not only Porchester Mark and RAM but Hungerford Mark as well. Previously it has been a Sunday Lunch, this year who knows??? Too ambitious? Hopefully not! (Presently the biggest issue might be where to hold it, our usual venues are in question)
Our thanks to all who attended this meeting and Porchester wishes you all a good and healthy summer along with a sincere wish from our WM that we can invite you all to join us in person for our Lodge meeting on October 13th.