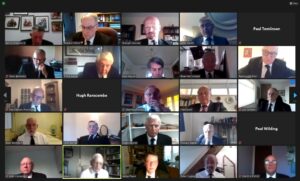 On Thursday 22nd April Charles Wilkinson Lodge held it’s second VBM. The Lodge was opened by the Presiding Officer, W. Bro. Ray Alexander, who thanked everyone for attending. The meeting was honoured by the presence of the Provincial Grand Master and a large number of acting provincial officers. The Secretary read the dispensation for the meeting to be held without the warrant. The W.M. welcomed the PGM and his retinue of provincial officers. A eulogy was delivered on behalf of W.Bro. David Sleep. The minutes of our last VBM were confirmed. The Treasurer delivered his report, giving details of the Grand Lodge reduction in fees. The BeMBA representative gave his report. The Almoner gave an update on the health and welfare of the Lodge members. The Presiding Officer closed the meeting at 8.07pm.