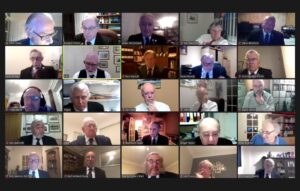 This was the first Virtual Business Meeting held by the Lodge, it was opened by the Presiding Officer at 6.05pm with 37 attending including R.W.Bro. Richard Oliver P.G.M. and W.Bro. Huw Hopkin Prov.G.Sec. together with a good number of other members of the Provincial team and Master of other Mark Lodges.
Three Eulogies were given for R.W.Bro. Alan Brunning; W.Bro. John Fricker and W.Bro. Ian Johnson.
As the Installation meeting could not be held in March it was agreed that the current W.M. and Officers should remain in office until, hopefully, the Master elect, Bro. Anthony Howlett-Bolton could be installed at the July meeting.
The Lodge accounts were presented and approved.
The Provincial Grand Secretary gave an update on the current situation at MMH and the Province, and the meeting being closed at 6.40pm.