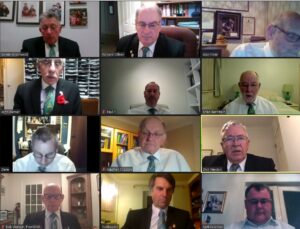 The Scribe read the Dispensation authorising the holding of the meeting and to hold the meeting without the warrant of the lodge being present.

Eulogies to W.Bro. Richard Routledge, RVM, and R.W.Bro. Alan Brunning were delivered by Bro. Bernard Greenwold and the R.W.P.G.M. respectively. The loss of these two fine gentlemen and outstanding masons was marked by a minute’s silence in respect of departed merit.

The Minutes of the last meeting (16th October 2019) which had been circulated were proposed for adoption by W.Bro. John Palmer, seconded by Bro. David Capel and carried nem con.

The Presiding Officer offered congratulations on behalf of the Lodge to W.Bro. David Lambton and John Palmer on ther being promoted to R.A.M.G.R.

There being no further nomination and no brother requesting a ballot Bro. David Capel was declared Worshipful Commander-Elect and W.Bro. John Palmer Treasurer for the ensuing year. Bro. David and W.Bro. John thanked the brethren for the trust reposed in them and pledged their utmost efforts for the well-being of the Lodge  in the coming year.

The Treasurer’s Report and Lodge Accounts 2019-20 which had been previously circulated were proposed for adoption by Bro. Bernard Greenwold and seconded by the Scribe and then accepted unanimously by those present. The Treasurer then proposed that the sum of £200 be taken from the Lodge Benevolent account and donated to BEMBA. This was seconded by W.Bro. Neil Coleman and agreed unanimously.

On a proposition by the Scribe, seconded by Bro. David Capel, W.Bro’s. Neil Coleman and David Lambton were unanimously elected Examiners of Accounts.

On a proposition by the Scribe, seconded by Bro. Brian Bernstein, W.Bro. Richard Haydon was elected as Lodge BEMBA representative.

The BEMBA representative reported that the Association’s finances were in excellent order and it was hoped that funds for the relief of brethren in need of support during these difficult Covid 19 times would be readily available. Donations of £1100 to Kent Mark Benevolent Festival, the East Lancashire Festival and the Berkshire Festival for the 2023 Masonic Charitable Foundation were agreed. Grants for equipment for the Thames Air Ambulance and the Thames Valley Hospice had been made.

The Scribe reported that dates for our meetings for next year had been confirmed.

The details of the Provincial Assembly of Royal Ark Mariners being held under the banner of the Berks and Oxon Installed Commanders Lodge No. 1330 had been passed to members.

There being no other business the Presiding Officer closed the meeting thanking all brethren for their attendance at 8-07 pm.