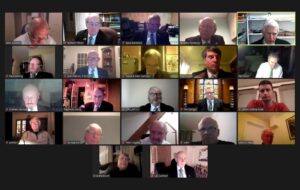 The first virtual business meeting of the Lodge was opened by the Worshipful Commander, W.Bro. Digby Woods who expressed his hope that this would be the first and last such meeting as things return to some level of normality. The meeting was honoured by the presence of the Provincial Grand Master and the Deputy Provincial Grand Master and a large number of acting provincial officers. After the Lodge Scribe has read the dispensation for the meeting to be held without a warrant eulogies were then delivered on behalf of W.Bro. Keith Tilling, Bro. Graham Foulis-Brown and W.Bro. Frank Hames who all passed away during the suspension of Freemasonry.

The PGM briefed the meeting on the present thinking of Grand Lodge towards the pandemic and gave a special thanks to Ted Lewis for the considerable amount of time and effort he had expended supporting Frank Hames during his long illness after his last heat operation.

Approval of the minutes of the last meeting held way ago in September 2019 followed with the election of a new Worshipful Commander Elect, Raymond Head and treasurer Ted Lewis proceeding to plan. Statement of accounts for financial years 2019 and 2020 were then approved and the meeting concluded with the Worshipful Commander thanking all those for attending and reiterating his hope that our September meeting, which would be the installation of Raymond Head, would be held in more normal circumstances.