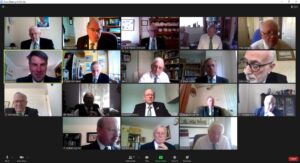 Virtual Business Meetings having become the normal way for Brethren to keep in touch it was refreshing to be slightly different by meeting in the morning.

The Presiding Officer W.Bro. Mike Sanders, R.A.M.G.R. declared the meeting open at 11.01am. Seventeen brethren were in attendance comprising 10 members and 8 visitors, The continued support of the active Provincial Grand Officers continues unabated. On this occasion the lodge was honoured to welcome both our P.G.M. and Dep.P.G.M.

Eulogies were given with sincerity and depth of feeling for both W.Bro. Peter Lloyd, R.A.M.G.R. and W.Bro. Frank Hames, Prov.R.A.M.G.R. both of whom had been active members of the lodge and would be greatly missed

The business of the meeting was conducted with the usual decorum interwoven with humour . The principal item being the election of Bro. Phillip Batten as Worshipful Commander for the ensuing year. Bro. Phillip thanked the brethren and informed them he was looking forward to his installation in August which all hoped would be a resumption of face to face meetings.

The August meeting agenda would also see the inclusion of an elevation ceremony following his successful election of Bro. John Cooley as a candidate for Elevation.

The Worshipful Commander elect confirmed that the Installation would preceed the Elevation much to the relief of the Presiding Officer.

The lodge welcomed W.Bro. Brian Cook as the new Scribe and the Presiding Officer thanked him for ‘volunteering’ to fill this rewarding and hopefully enjoyable role. This sentiment was echoed by our P.G.M.

The business of the meeting having been concluded the Presiding Officer declared the meeting closed at 11.37am.