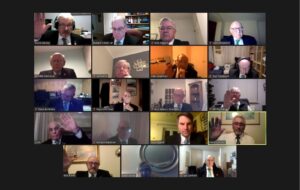 The Linden Acre Lodge of RAM No. 1568 Virtual Business Meeting on Tuesday 26th January 2021 was attended by 10 members and 9 guests.

Once the letter of authority and the dispensation to hold the meeting were read the Lodge was declared open by the Presiding Officer, W.Bro. David Wiltcher.

The minutes of the last virtual business meeting had been circulated and approved by the members present. W.Bro. John Kirkpatrick was nomiated as the Commander Elect and R.W.Bro. Peter Sands, P.P.G.M. as Treasurer, both nomiations being approved. The Treasurer report was received and the accounts approved, the Almoner and BeMBA represenative reports were also received.

The Provincial Grand Master thanked all those who were present, wished them all well and looked forward to the next meeting of the Lodge.