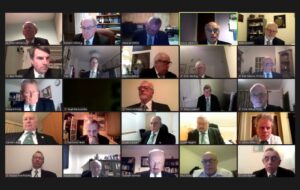 There were 26 Brethren in attendance at the virtual business meeting of Friendship & Care Lodge of RAM No, 1555, 11 members and 15 guests, on Friday 19th February 2021.

The Presiding Officer W.Bro. David Arnold, Worshipful Commander will declared the meeting open at 1830hrs.
The WCN asked the Acting Scribe W.Bro. Mike Curphey to read the letter permitting the meeting as well as the dispensation.
The WCN then asked R.W.Bro. R J Olliver to deliver a eulogy in memory of W.Bro. Ian Brook Johnson, Prov.R.A.M.G.R. following which the WCN then asked W.Bro. Simon Jeffery to present a eulogy in memory of W.Bro. Ted Melber, R.A.M.G.R. The WCN then called on all brethren to observe minutes silence in memory of both esteemed Brethren.

W.Bro. Paul Digby, Scribe entered the meeting and gave apologies for lateness, and resumed the duties of scribe
The minutes, of the last meeting which had been circulated previously were approved by those present.

Bro Richard Purdy, Treasurer, proposed a donation of £30 be made in memory of W.Bro. Ian Brook Johnson and W.Bro. Frank Hames. This was seconded by W.Bro. Paul Digby and passed by all present. Following which the Treasurer then gave his report, and presented the accounts, but as both of our examiners had passed to the Grand Lodge above, they were presented as unexamined accounts.

W.Bro. David Arnold, WCN was proposed and confirmed as the WCN elect for the ensuing year, with all other officers retaining their current positions.  The WCN elect duly confirmed all officers were to remain in their current positions, but due to the unfortunate passing of our two members W.Bro. Ted Melber and W.Bro. Ian Brook Johnson, the post of Chaplain and ADC needed to be filled, The WCN gave notice that at the next meeting he would appoint W.Bro. Anthony Thomas to the position of Chaplain and W.Bro. Steve Talbot as ADC, both brethren accepted their new posts.
W.Bro. Graham Seeman gave a report on BEMBA. He stated that the finances were reasonably healthy and lodges were continuing to be very generous. He again stressed that the fund needs names of brethren, their partners or other members of their families who may need assistance, to be put forward so that they could received some assistance if required. He stated that there had been a couple of names put forward and assistance will be given if possible. He stated that as the Blood Bike charity was our chosen charity last year the Thames Valley Air Ambulance is our chosen charity this year, and that the fund is in negotiations to see what meaningful project we can fund, rather than just donating to the general running costs, this was ongoing , but looking like it will conclude soon.

The presiding officer closed the meeting at 1918hrs.