The 3rd Annual Provincial Royal Ark Mariner Assembly was held at Windsor Castle Lodge of RAM No. 519 on Wednesday 19th October 2016 when approximately 50 members of the Province attended.
Following the opening the Treasurer, W Bro John Palmer informed those present that the Lodge wished to make a donation to the Provincial Grand Master towards the 2017 Festival Fund. The PGM was delighted to receive the donation from W Bro Steve Crostion and thanked the Brethren of the Lodge for their generous donation.
The Provincial Grand Master was then asked to present to Bro David Capel (back row far right) with his Grand Lodge Certificate.
The next item on the agenda was to Instal Bro Jim Dance (back row 5th right) as Worshipful Commander which was duly done by W Bro Steve Croston (back row 4th right) in a most sincere and confident manner. The new Worshipful Commander then appointed and invested his officers and completed the rest of the agenda.
The PGM, RW Bro Richard Olliver, GMRAC, Provincial Grand Master assumed the Chair of the Lodge and requested W Bro’s Simon Jeffery to take up his duty as ProvGSW, Huw Hopkin to act as ProvGJW, Digby Woods as ProvGChap, Mike Sanders as ProvGSec, Steve Berkshire as ProvGDC and Bro Ted Lewis to act as Guardian. The Provincial Grand Assembly was opened in due form and at the appropriate time the PGM appointed and invested with ProvRAMGR W Bro’s Brian Cook (Old Rectory Lodge No. 1398), Ed George (Windsor Castle Lodge No. 519), Frank Hames (Wallingford Lodge No. 1162) and in their absence W Bro’s Ian Spence (Porchester Lodge No. 27) and Bill Rhymes (Linden Acre Lodge No. 1568).
The PGM then addressed those present following which he was delighted to present Mark Benevolent Fund awards to the following Brethren:
Front row from left to right
W Bro Doug Jamieson – Patron
W Bro Frank Hames – Grand Patron Gold Awrad
W Bro Les Langley (far right) – Grand Patron
Back row from left to right
W Bro Alan Smee (2nd left) – Grand Patron
W Bro Ed George – Life Governor
W Bro Jim Dance – Life Governor and also a Grand Patron collarette for the Lodge
W Bro Alan Fone – Vice Patron
W Bro Robin Trevett – Patron
The PGM thanked all the Brethren for their individual generosity and the members of Windsor Castle Lodge of RAM No. 519 for their collective generosity.
The Provincial Grand Assembly was closed, Alms were taken and the the PGM retired from the Lodge.
The final parts of the evening were then conducted following which all dined in the Hart and Garter with an excellent meal and in concord and fraternal affection. A good night was had by all.

The next Provincial Assembly will be held under the banner of Friendship & Care Lodge of Royal Ark Mariners No. 1555 on Friday 20th October 2017. 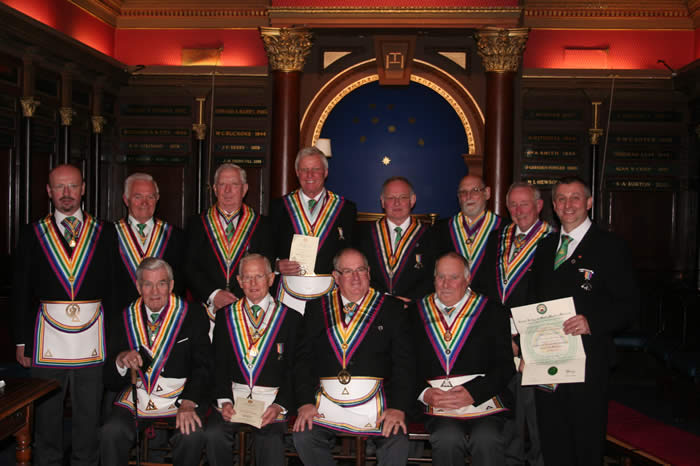